President Trump has been impeached

Just shy of the third anniversary of his presidency, Donald Trump was impeached in a mostly party-line vote in the House of Representatives on Wednesday evening.

Trump became the third president to be impeached in US history.

Trump now faces a trial in the Republican-controlled Senate, expected to begin early next month and to produce an acquittal of the president. 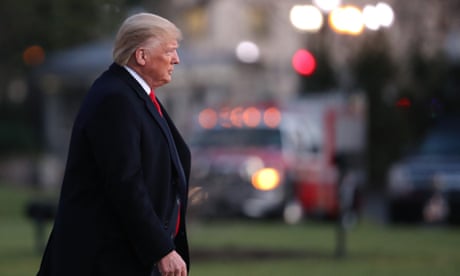 As the vote unfolded, Trump spoke at a campaign rally in Battle Creek, Michigan. “It doesn’t really feel like we’re being impeached,” he said, to cheers. “This lawless partisan impeachment is a political suicide march for the Democrat party.”

But Trump’s fierce efforts to seal himself in a bubble of adulation, and his insistence that Republicans pretend away the existence of facts threatening to pierce that bubble, could not divert the historic reality coalescing on Capitol Hill.

Following the vote, the House speaker, Nancy Pelosi, said it was a “sad day” for the country. “The president’s reckless activities necessitated us having to introduce articles of impeachment,” she said, before thanking the various House committee leaders who spearheaded the impeachment inquiry.

“We cannot name managers until we see what the process is on the Senate side,” she said. “So far we haven’t seen anything that looks fair to us.”

Democrats on Wednesday questioned remarks from the Republican leader of the Senate, Mitch McConnell, who said on Tuesday he was “not impartial about this at all”.

‘A republic under threat’

Calling Trump “an ongoing threat to our national security and the integrity of our elections”, the House speaker, Nancy Pelosi, opened the debate on the articles of impeachment just after midday.

Wearing a large pin of the ceremonial mace of the chamber as she rose to speak on the House floor, Pelosi warned that “our founder’s vision of a republic is under threat by actions from the White House”.

“It is tragic that the president’s reckless actions make impeachment necessary,” she said. “He gave us no choice.” The speech was met with sustained applause from her caucus.

Democrats accuse Trump of pursuing a scheme to cheat in the 2020 election by pressuring Ukraine to manufacture bad news about the former vice-president Joe Biden, one of Trump’s main Democrat rivals, and then blocking congressional oversight.

Republican Doug Collins of Georgia, the ranking member on the judiciary committee, said that impeachment had always been an “inevitability” under the Democrats and denied that Trump had committed a crime.

In a marathon and at times painfully repetitive partisan volley, members exchanged one- and two-minute blocks of speaking time over about eight hours of debate. Republicans accused Democrats of having a vendetta against Trump and running what they said was a corrupt process, while Democrats taunted Republicans for not even attempting to defend Trump on the merits. 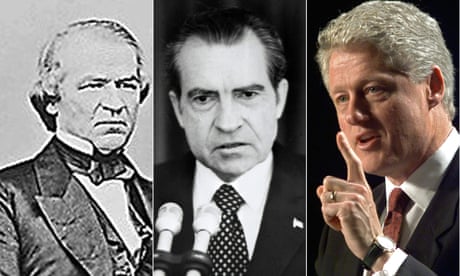 Trump joined Andrew Johnson in 1868 and Bill Clinton in 1998 as the only US presidents to be impeached. Richard Nixon resigned in 1974 before he could be impeached.

A two-thirds majority vote in the Republican-controlled Senate would be required to convict and remove Trump from office. With no Republican senators currently voicing support for impeachment, Trump appeared safe to survive.

Zero Republican representatives voted in favor of either article of impeachment, fueling the party’s charges that the proceedings were driven by partisanship. Democrats replied that Republicans were hostage to Trump and unable to deliver a sound judgment in the matter.

Two Democrats, including one whose staff said he would soon be switching parties to the Republican side, broke with their party to oppose both articles of impeachment. A third Democrat, Jared Golden of Maine, split his vote. A fourth Democrat, the presidential candidate Tulsi Gabbard, voted “present”. The House’s sole independent, former Republican Justin Amash, voted for impeachment.

Trump was handed the vote tally onstage during his rally. “We didn’t lose one Republican vote and three Democrats voted for us,” he said to applause. “The Republican party has never been so affronted, but they’ve never been so united as they are right now.”

Early in the day, the House minority leader, Kevin McCarthy of California, presented a resolution seeking to condemn Adam Schiff, the chair of the intelligence committee, and Nadler for what McCarthy said were abuses of power and violations of procedure. The resolution was tabled without a vote.

Schiff, whose committee performed the bulk of the investigative work in the impeachment inquiry, took to the floor just before 4pm to detail the case against Trump.

“The president of the United States was willing to sacrifice our national security by withholding support for a critical strategic partner at war in order to improve his re-election prospects,” Schiff said. “But for the courage of someone willing to blow the whistle, he would have gotten away with it.

Trump’s event Wednesday night was billed as a Merry Christmas rally in Battle Creek, Michigan, a shrinking food manufacturing center in a county that swung from supporting Barack Obama in 2012 to backing Trump in 2016.