Home » About Us » Board of Trustees » Dr. Nicholas Azinge 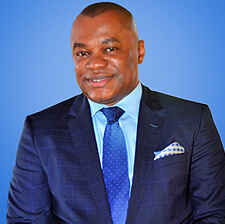 Sir Dr Nicholas Azinge was born in 1962 and had his primary and secondary education between 1968 and 1977 in Benin City in today’s Edo State. He did his A’levels from 1977 to 1979 at the Federal Government College, Warri, from where he proceeded to read medicine at the College of Medicine, University of Lagos between 1980 and 1985, where he obtained the MBBS degree. He hails from Asaba in Delta State.

Between 1990 and 1992 he was on paediatrics and neonatology residency at Mount Hope University Teaching and General Hospital, Port of Spain, Trinidad and Tobago. He later moved to the United States where he worked for a short period before commencing his residency programme in internal medicine. He qualified as a Board-certified consultant physician with special interest in endocrinology in 1998.

Sir Nicholas held teaching and administrative positions between 2003 and 2009 in the US, including being Assistant Professor of medicine between 2007 and 2009. While in the United States he was appointed Commissioner for Men’s Health by the Governor of the State of Maryland.

Between 2009 and 2015, he was in the Delta State University Teaching Hospital (DELSUTH), Oghara as a Consultant Physician and Head of the Department of internal medicine and Head of the Endocrinology Unit. He also held administrative positions of Deputy Chairman Medical Advisory Committee (DCMAC) and, later, Chairman Medical Advisory Committee (CMAC) of DELSUTH.

He remained head of the endocrinology unit of the Department of internal medicine at DELSUTH until his appointment as Commissioner for Health, Delta State, in September 2015. Sir Dr Nicholas Azinge is married with children.